A short and sweet race cap for the 1st Annual Jordan Lake 12- Hour Challenge.  A challenge it was! This single track trail around the banks of Jordan Lake is sure to humble the most seasoned trail runner.  It was deceivingly beautiful and torturous at the same time. Doable for sure, likely a little easier for those who are seasoned at running hills. Flatlanders beware! Straycat runner wrote a hilarious and accurate  description of the 2.93 mile loop. It is too good not to share.

“This 2.9 mile loop will feel more like 7, you poor fool.  The trail surface is practically interlaced with a labyrinth of roots, and some one (probably Brandon) trucked in several metric tons of rocks.  There ARE indeed two road crossings, but you probably won’t see a car so you cannot depend of getting clipped by a vehicle to bring a welcome end to your run.  There ARE no water crossings, but there are several mud holes that you can carefully pick your way around until you can’t at which time you don’t worry so much about avoiding it. There ARE many glimpses of Jordan Lake… if you DARE to look up from the patch of imminent danger that greets each stride (or if you stop to take a leak). Most trail runners would consider the course moderately hilly, but I am a road runner so I would consider the trail “burro with a pack” hilly or “mountain goat” hilly.  Or “if it was any more hilly I would need a grappling hook” hilly.”

Read the rest of Straycat’s race recap! Its a great read! 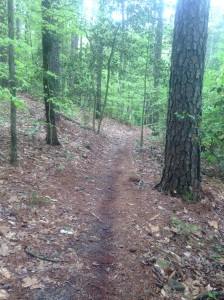 Jordan Lake 12-Hour Challenge helped me prove to myself that I am capable to achieving success in a  trail ultra.  While I am well beyond my Pine Mountain, GA trail ultra fail, it still haunts me.  I have since successfully conquered the distance (and then some) but this was my first attempt at ultra trail distance (on technical trail). Final redemption achieved with a 50k finish! 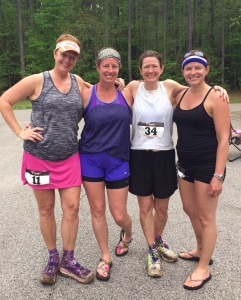 DONE! me, Amy ( my flat lander sister who declared  she HATES F’in HILLS), Becky and Kmac. Ultra Virgins no More!

In addition to my personal redemption, I was overjoyed and beaming with pride with my #BRFs ( Best Running Friends…Kmac and Becky) successful completion of their FIRST ULTRA! Both Kmac and Becky have been tremendous supporters of my jump into the ultra distance.  They have logged many miles with me during my insane training regimen and offered support and encouragement along the way.  I am thrilled with their 50k accomplishment!  Welcome to the “ultra side” of running gals!  Looking forward to our next adventure at Croatan24 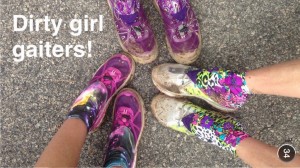 Big thanks to Erin, Doug, and Brandon for a successful inaugural event! The stocked aid station, on course COLD water, and happy volunteers all contributed to this fabulous event.  The ice cold water was such a bonus in my book! 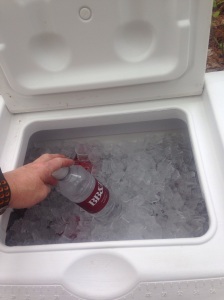 This on course ice chest with cold water was AWESOME! If I could have jumped in it I would have in the heat of the day!

Although in the midst of running this event,  I declared ” One and done on this one.” A few days following, I decided it was totally worth running again.  After 365 days of recovery, I should be good to go! If you are up for a challenge this is a great small event that I promise you will enjoy. Maybe not during…but certainly will appreciate it when you are done! If it were easy everyone would do it! #Runlocal!

You cannot beat the ultra environment! We met Jim Kitchen the previous weekend when he was running CedarIsland40 and  we volunteering.       (Sister Amy is race director). We razzed him about joining us for the 12 hour challenge.   We were thrilled when he showed up to support our efforts and cheer us on! In the words of Brandon Wilson ” In an ultra event you are a name not a number.” So true! The small events lends itself to a very personal environment! 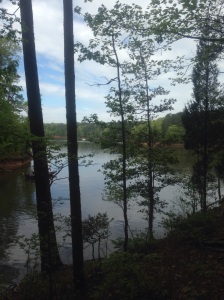 After a week of rain, there was plenty of mud! Adds to the fun! 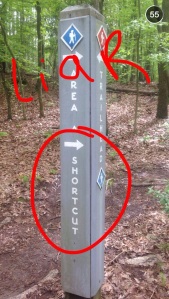 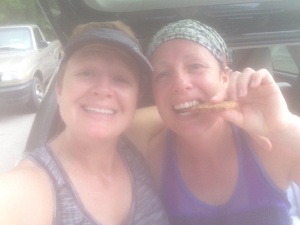 Never under normal circumstances would I eat m&m’s mixed with potato chips! They were yummy! 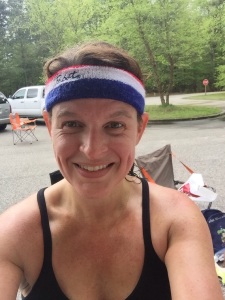 Kmac and her PBR sweat band. I literally almost fell over in laughter when she past me on the trail! I spend a lot of time with this girl and have never seen this jewel!

Adult on-set Endorphin Junkie! Blogging to funnel positive energy into the things I am most passionate about- endurance athletics, family, and my rescue doggies! ~Jennifer M

Seeking Endorphins! What is next